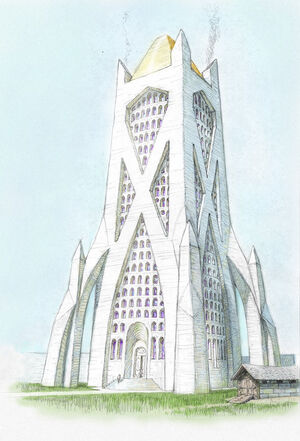 The Tower is where most of the Wizards in the Castle live. The tower was created by Hotep-Ra, who was the very first ExtraOrdinary Wizard.

After Hotep-Ra's rescue of the princess, he asked only two thing from the Queen: a small plot of land in the center of the castle, and help to build a tower. As the center of the castle was already occupied by a group of Alchemists who refused to leave, he was granted a nearby square of empty land. There he constructed the Wizard Tower, the tallest structure in the castle to this day. Over the next couple of years, Hotep-Ra built an empire of wizards and crowned himself Extra-Ordinary Wizard. The Wizard Tower remained a symbol of hope and power for centuries,and had not been

succesfully attacked until Tertius Fume marched and arn amy of forty-thousand warrior jinn through underground tunnels into the tower. However, the attack was thwarted after the jinn reached the castle.

At the top of the list is the ExtraOrdinary Wizard. There is only one at a time. The current is Marcia Overstrand. Other notable past ExtraOrdinary Wizards pertinent to the plot of the series include Alther Mella and DomDaniel, as well as Julius Pike, beloved mentor to Syrah Syara.

Next in line are the Ordinary Wizards. Some of these reside in The Ramblings, a very large (and rambling) maze of streets, which make up the a huge collection of rooms and apartments for rent.

Next, there are the Apprentices to the Ordinary Wizards who will eventually assume their masters titles.

The most outstanding feature of the Wizard Tower is the moving silver spiral staircase. Upon a wizard's word, the staircase will move either fast or slow, up or down. Marcia has a bad habit of causing Ordinary Wizards grief when she unknowingly changes the staircase direction on them; the Extraordinary Wizard can also put the staircase into sa uperfast Emergency mode. The stairs also can be Stopped, which ExtraOrdinary Wizard Big Brian Boom did to lose weight, but angered other Wizards who also had to walk.

It is said that no-one has ever been able to count the number of windows of the Tower and get the same number twice, which may be due to the UnStable window on the seventh floor, which is not always visible. The windows have a purple Magykal film floating over the windows, which may apper rainbow coloued on a sunny day.

The Magykal lights that flicker around the Tower vary in colour from light purple to dark indigo blue, depending on the amount and type of Magykal activity within the Tower. The underlying colur of the Tower is silver.

When you enter the Tower, the floor of the Great Hall spells a message, for example "Welcome Apprentice." This is a popular attraction otothe Tower. When things are bad, the floor becomes overly optimistic, displaying messages such as "It is a beautiful morning. All is looking good".

Another thing is the thousands of ghosts that haunt the halls, most famously Alther Mella, although other notable Castle ghosts, such as Tertius Fume and the knight outside Princess Jenna's room have visited or been Seen here. Many ghosts can be found all over, but even more are there, they have just chosen not to be Ssen.

The pictures inside the Tower appear and dissapear due to an ancient long-lost Spell. The pictures depict moments throughout the history of the Wizard Tower. Pictures cannot be produced on demand, though.

The Wizard Tower also has a dragon launchpad, which is used by Septimus Heap and his dragon, Spit Fyre.

The Stranger Chamber is a large, windowless room off the Great Hall. Used to hold visitors who are considered a potential threat to the Tower, it is completely Shielded, Secured, and devoid of Magyk. All the protective enchantments are sealed away in a second skin buried in the walls. Designed to put visitors at ease, and give them no cause to suspect that they are being held prisoner, it is carpeted with a thick, finely patterned rug beside a fake fireplace, containing a fire basket full of welcoming candles burning brightly. A squashy sofa, a comfortable armchair, and a table piled with interesting books, a bowl of fresh fruit, a tin of biscuits and a jug of fresh water complete the furniture. Visitors are shown to the armchair, which is placed on top of a large trapdoor over which the rug has been carefully cut out. This trapdoor can be opened via a lever by the door,and sends the visitor, and the armchair, hurtling down a chute, to either the moat,or into a cell hewn from the bedrock of the Castle.

Throughout the Tower are a number of ExtraOrdinary Conceals. Undetectable and used only by ExtraOrdinary Wizards in the confines of the Tower, they should all be entered in the Concealed Register so that subsequent ExtraOrdinary's would know what was Concealed where. However, this has not always been done. Julius Pike Concealed the moving chamber to the Chamber of Fyre, located beneath the spiral stairs, in his bid to wipe all evidence of Alchemie from the Castle after the Great Alchemie Disaster.

The 20th and 21st floors belong to the ExtraOrdinary Wizard and his/her apprentice. All other floors are free for all wizards to make use of, as well as anyone else who is in need of them. There are 21 floors in total in the Wizard Tower.

Two wizard apartments are on each of the 19 bottom stories, except the lowest, which is the hall.