The World of Septimus Heap

Both the Septimus Heap series and the TodHunter Moon series are set on Earth but 10,000 years in the future which wasn't confirmed until the end of Fyre when Septimus wrote the date in the snow: July 4, 12,004. The book ends with a quote from Arthur C. Clarke: "Any Sufficiently Advanced Technology is Indistinguishable from Magyk", confirming that the series is set in the far future.

This has been hinted at in Syren when Lucy Gringe and Wolf Boy talk about the Red Tube. Wolf Boy says he has heard stories that people used to travel to the moon in things like that. Lucy dismisses this, however, it's apparent they are talking about Apollo moon missions.

The map in PathFinder shows that the overall shape of the landmasses still looks familiar but according to Angie Sage, the sea levels have risen by 50 meters at some time during the last 10,000 years as shown in Marwick's Map below.[1] This explains why on a more local scale the Geography has changed massively as you can see from the maps and in the books.

The Maps from the Books drawn by Mark Zug 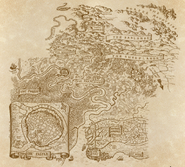 Is the land in which the Castle, the Port and many of the other locations in the series are located. Angie Sage says that the Small, Wet Country Across the Sea is where present-day England is or at least what is left of it after sea levels have risen.[4] The Castle and the region surrounding it appear to be located in Southern England according to Marwick's Map of the Ancient Ways with Angie Sage saying that she reckons that "the Castle is in England, somewhere near where London is right now. But of course, it is way into the future."[5]

The Badlands are a rocky and hilly valley on the northern borders of the Southern Small, Wet Country Across the Sea, where DomDaniel once practised his dark magic in an observatory atop a hill. They are inhabited by Land Wurms, giant carnivorous snake-like animals, making it a dangerous place. Simon Heap also used to live there with Lucy Gringe.

The Farmlands are a large expanse of rolling hills, orchards, and all sorts of farms. They exist between the River, Port, and Marshes, and lead up to the Badlands. Merrin, Simon, and Jenna have all travelled on the gravel road going from the Castle to the Farmlands.

The Isles of Syren

The Isles of Syren is an archipelago of islands that lie between the Small, Wet Country Across the Sea and the Far Countries. They have a resemblance to the Scilly Isles in our time but are in fact "a hilly bit of the Netherlands" but with a climate similar to the Scilly Islands and Caribbean due to the Gulf Stream.[4]

The Far Countries appear to cover all countries which are not on the same landmass as the Small, Wet Country Across the Sea in other words - Eurasia and Africa.

The land where the Pathfinder village is.

The Land of the House of Foryx

Angie Sage said that The House of Foryx is said to be located where modern Bavaria is today. [6]

Speculated Location: The Eastern Snow Plains appears to be located in southern Siberia in an area between the Aral Sea and Lake Baikal. In modern-day Russia, the area to the west of Lake Baikal is well known for its Lapis Lazuli deposits and its snowy climate which seems very appropriate.[7]

The Lands of the Long Nights

The lands where the Northern Traders come from which appears to be located in modern-day Scandinavia.

The Desert of the Singing Sands

Where the Red City, the Star Tent, the City of the Free, and the Port of the singing sands are.

Speculated Location: Most likely in northern Africa judging by some characters being described as Berber and from the compass rotation on the map.

The Large Continent Across the Wide Ocean

The place where Spit Fyre's mate is from.

Speculated Location: almost certainly the Americas, especially since Angie Sage, used a similar name to describe when asked what America would be called on Ask Angie).

The Islands of the Shallow Seas

Milo Banda brought back some bales of woollen cloth and a selection of pearl necklaces from this location during Syren (book).

Speculated Location: The Islands should be located in East Asia due to the large amount of pearls and Wool being farmed there. With the most likely location within that area being China since large parts of it have been flooded to form an inland (shallow) sea due to the increase in sea level.

A map of Septimus' World with the approximate locations of the different lands.

Warning: the map is based on satellite imagery so be aware that terrain has changed very noticeably in the 10,000 years between Septimus' time and ours hence this isn't a precise map.