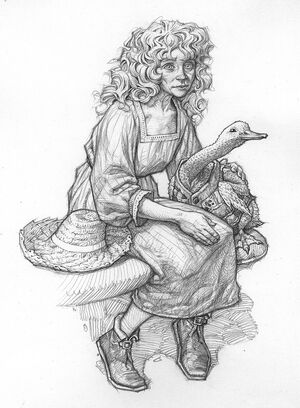 Sarah Heap is the mother of Septimus Heap and six other children, along with being a foster mother to Queenling Jenna Heap.

Sarah Heap was once apprenticed to a woman living in the Forest named Galen to learn healing and Magyk. She met her husband, Silas Heap, there.

After Sarah was married, she had seven children. She believed one of them (Septimus) to be dead in the first few hours, and another (Queenling Jenna) to be a foster child, brought back from Silas. Sarah did her best to care for her children and tried to teach them good Magyk. At the end of Physik, she adopts a naked duck named Ethel (brought by Jenna Heap 500 years before). In Darke, a Darke Domaine forms in the Palace, and Sarah runs after Ethel to save her. However, she gets trapped in the Darke Domaine with Ethel. When she escapes, she makes a contraption of what she calls a "duck in a bag". This is so she can never lose Ethel. Sarah believes it is fine, but for everyone else, especially Silas, think that it is quite odd.

Sarah Heap is described as having 'the Heap hair', a mass of blond curls. She is a slim

woman, with green Wizard eyes and a rather harassed expression.